In late August I finally published the regzbot code I had been working on for months. Shortly after that I started field-testing Regzbot, as can be seen by a few messages on the regression mailing lists containing #regzbot commands. I only tracked a few regressions that way, but obviously that was enough for me to find and fix more than just one or two bugs. :-) But something else was turned out to be more important: field-testing made me notice a few areas where regzbot needed improvements or small adjustments to be really useful. Implementing those again kept me busy for a while. :-D

Thx to this the webview got improved as well. I had kept it local for the initial field-testing, but after the latest improvements I finally put it online. Yes, it looks like from the 90s – but making it beautiful has to wait, as getting regzbot working properly and established among the kernel developers (which will likely need quite some finetuning) is more important task for now. 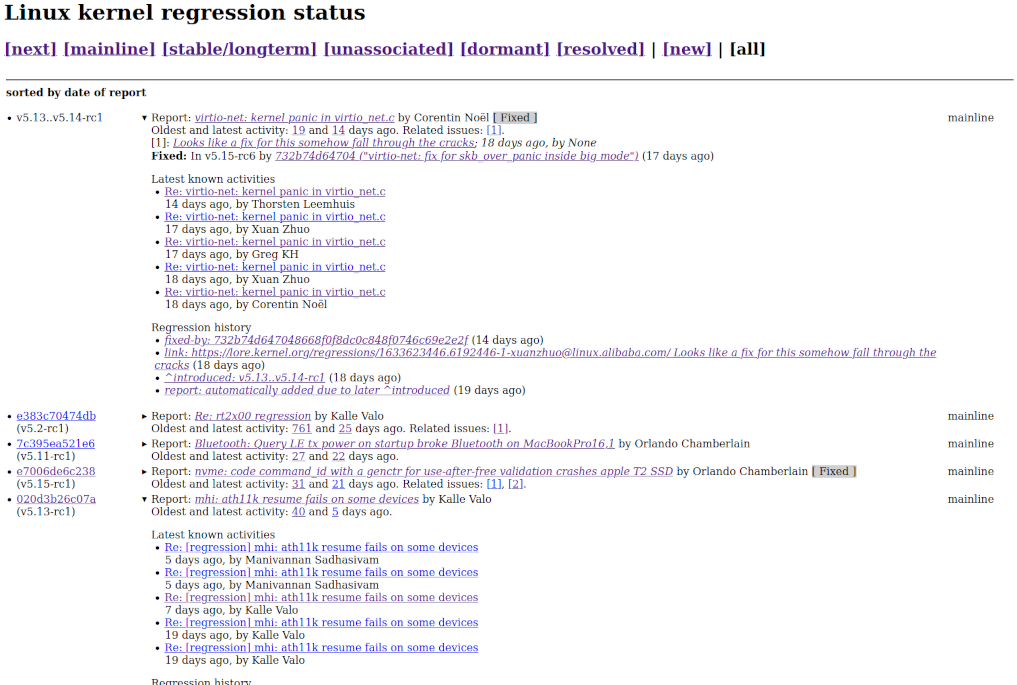 I also wrote a guide called "getting started with regzbot". It tells users and Linux kernel developers all the important things they need to know about using regzbot. Haven't found time yet to work on a reference documentation, but it gets higher on the Todo list.

I prepared some patches for the Linux kernel documentation (v1, v2, v3); the third version got accepted and will make it into 5.16. This change makes it more explicit that commit messages for regression fixes should link to the mail with the report. Some developers do that already, as that is expected for a while already; some nevertheless don't place them. The improved documentation will help to pursue those developers to finally add these links – and hopefully also make some reviewers point out when they are missing. Those links are important, because Regzbot heavily relies on them: they allow it to automatically close regressions when the fix is applied in the Linux version line where the regression occurs.

I also implemented everything to make regzbot send weekly reports. Just like the webview, the reports use a categorization and sorting that gives priority to those regressions that are either new, from the current development cycle, or have a known culprit; on the other hand, regressions where nothing happened for a while are hidden or only shown on other pages to avoid clutter. That is a bit unusual for an issue tracking software, but round about in line with the practices of Linux kernel development, as it makes some things obvious explained in the kernels "reporting-issues" document – like "it's important to find the culprit for a regression" and "if nothing happened in a while, poke someone what can be done to improve things". More on this another time, as it might need adjustments depending on the feedback from the kernel developers. 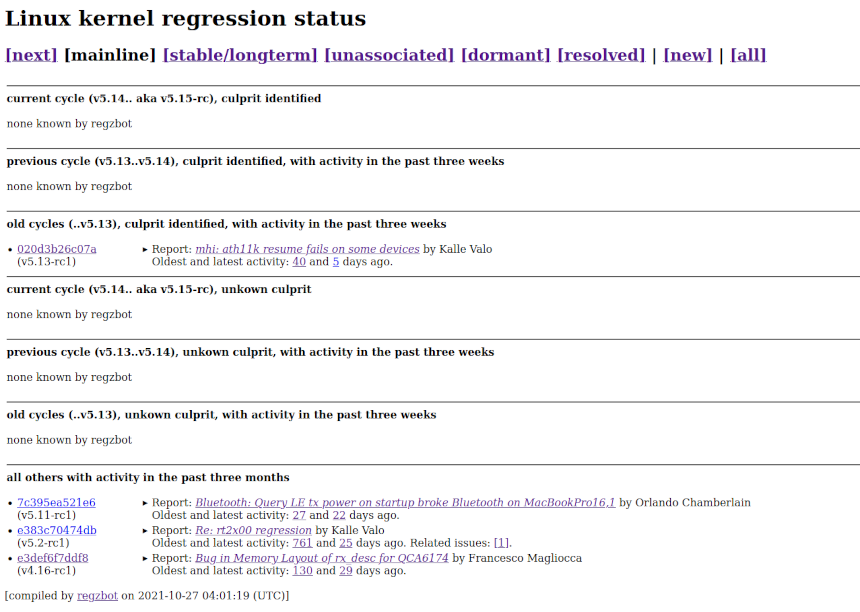 Free to use for all (now for real), but still alpha/beta

Field-testing regzbot mostly flew under the radar, as I didn't announce it widly. That was on purpose, as I wanted to ensure the bot round about works as intended before more people start to use it, otherwise it might be off with a bad start. But with the latest improvements and the report feature now in place I plan to attract more attention. That's why I'll start to sent weekly reports once Linux 5.15 is out. In the reply to the 5.15 announcement I'll also tell the world that regzbot might still have quite a few bugs, but that it's everyone is free to use it. That hopefully will make a few people give it a try; maybe I can even pursue a subsystem developer to actually use regzbot directly.

The last step will likely find a few more bugs and deficiencies that will keep me busy, but that's how the world is. :-D