regzbot: 'the design' aka 'how is this thing supposed to work'

The bot this project will build got a name: "regzbot". That makes it a good time to explain how it will look like and how it's supposed to establish proper regression tracking in the Linux kernel development process. So here is a simple example that is more concrete than the vague introduction post. Below text was also posted to Linus, Greg and a few mailing list as RFC.

The ideal case is simple. Someone reports a regression to the mailing list recently created for regression reports on my behalf. There the user includes a tag like this:

That will make regzbot add the report to its list of regressions it tracks, which among other will make it store the mail's message-id (let's assume it's xt6uzpqtaqru6pmh@earth.solsystem). Ideally some developer within a few days will fix the regression with a patch. When doing so, they already often include a tag linking to the report:

Regzbot will notice this tag refers to the regression it tracks and automatically close the entry.

That's it already. The regression was tracked with:

In the ideal case regzbot thus seems to be of no use. But obviously things will be anything else than ideal quite often – for example when nobody fixes the reported regression.

The webpages that Regzbot will generate (see below for a mockup) will show this. They among others are meant for release managers like Linus or Greg to check how things stand. That makes it easy for them to simply revert the culprit change to resolve the regression; in other situations they might decide to delay a release to get crucial regressions solved.

And that's what regression tracking is about: providing a view into the state of things with regards to regressions, as that's the important thing missing in Linux kernel development right now.

That can't be all

Of course the world is more complicated than the simple example scenario above, as the devil is always in the details. The three most obvious problems the initial ideal scenario left aside:

How will it look

Here is a mockup: 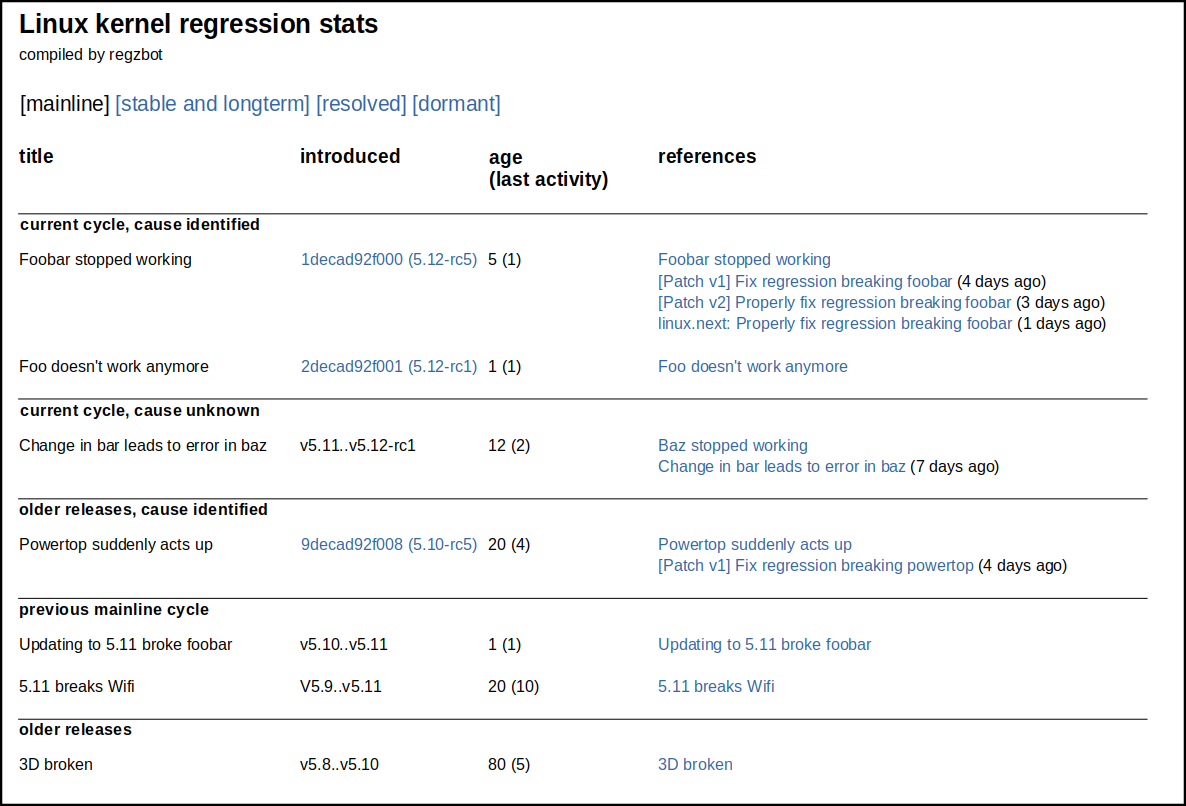 Even more problems in the details

Regzbot on purpose will lack many features found in traditional bug trackers: it's meant to be a simple tool acting in the background without much overhead, as it doesn't want to become yet another bug tracker. Nevertheless, it will need a few features they typically offer. Those will be usable via tags that need to be dropped into mails send in direct or indirect reply to the mail with the report:

In the long run this is supposed to work in both directions, so you can use it in a thread started by a regression report to link to some other discussion or vice versa.

There are a few things of note:

Then regzbot can look those commits up and from that determine the affected versions. Obviously the reporter will likely not be aware of it, hence it's likely that the stable maintainer or the developer need to send a mail to make regzbot aware that this regression affects multiple versions.

The rough initial idea had been to reuse parts of the syzbot golang source code, which already has an email interface similar to the one regzbot needs. But the closer I looked, the more I came to the conclusion that writing something in python is easier and better (even if that means I need to bring my really rusty python skills up to speed). That also has the benefit that python afaics is preferred by the kernel.org admins, which would make it more attractive for them to host the bot later.

The focus will be to properly establishing regression tracking with regszbot first. All features not strictly needed will thus be left out first to focus on what's most important. I'll also provide documentation. And to see how things go I ill use the bot myself to track regressions as I did a few years ago. But just like any other tracking solution it will always need some hand-holding...

Posting a variant of above text to LKML let to a small discussion where a few important points were raised – and best written down here to make sure they are not forgotten:

This website is part of a project that has received funding from the European Union’s Horizon 2020 research and innovation programme under grant agreement No 871528.